A Match Made in Henna: How a group of Red Heads changed the perception of women and sports. 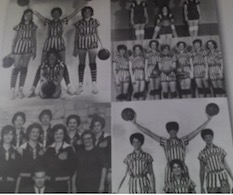 Breaking the Press: The Incredible Story of the All American Red Heads

By Orwell Moore and Tammy Moore Harrison with Howard Rankin

One of the great things about being a writer is you often get to share history and sometimes it is important.

It started our partly as a gimmick, the brainchild of a man who was both a marketing genius and avid basketball player, and his wife who owned a chain of beauty shops. Beauty shops were an emerging market in the mid 1930s but women’s sports wasn’t. From Breaking the Press: the Incredible story of the All American Red Heads

“The Women’s Division of the National Amateur Athletic Federation (WDNAAF) took the position that basketball, along with other sports, were too competitive for women and launched campaigns to prevent the sport being played in schools, industrial leagues, or frankly, anywhere.”

This proscriptive approach actually paved the way for the success of the All American Red Heads by setting up the expectation that women shouldn’t be playing such a vigorous game and that there was no way they should even try to compete with men.

However, less than twenty years after women got the vote that marketing genius Ole Olson, not only put a women’s team together, he scheduled them to play by men’s rules and against men’s teams.

“Regardless of the Olsons’ intentions and how it evolved, the notion of combining athletic competition with beauty was a direct and bold challenge to the cultural view that competition and femininity were mutually exclusive. And the Olsons really threw down the gauntlet when they decided that their team would only play against men using men’s rules. If the notion of fielding a basketball team happened organically, at some point there was clear intent on the part of the Olson’s to deliberately create a different concept — having women play only against men using men’s rules.”

The Red Heads were a huge attraction wherever they went, and even some places they didn’t. They travelled to every corner of the United States, to the Philippines and Mexico and twice toured Alaska. Apart from a break during World War II, the Red Heads played for fifty years. They were featured in major magazines and on legendary TV shows. They once had a 96 game winning streak and they won most of the games they played. They had a bruising schedule that had them traveling across the country in a limo and playing games every night, and sometimes twice a night. They contributed enormously to the changing perception of women in sports and helped paved the way for Title IX that mandated equal opportunity for women in any federally funded education program, including sports. It took them half a century but the Red Heads ultimately provided the opportunities for girls to play basketball at all levels and in doing so, made their show obsolete.

From the book, describing Tammy Harrison making her acceptance speech on behalf of the Red Heads at the Naismith Memorial Basketball Hall of Fame Induction ceremony:

“As you have read, the Red Heads were trailblazers, pioneers who inspired women and defied the expectations of the time. They helped create a new image and perception of a woman. She could now be an athlete who could compete with men.

“It’s easy in hindsight to see the natural progression of things, to see how one step leads to the next, and to the next, until a small grain of sand turns into a beach, or an outrageous idea into an accepted norm. Hindsight minimizes the effort, courage and insight that is needed to get a ball — even a basketball — rolling.”

Listen to the radio show with Tammy Harrison who grew up with the Red Heads, daughter of owner and coach Orwell Moore and her mother Lorene, who just happened to score more than 35000 point over a decade long career with the legendary women’s team

Get your copy of Breaking the Press: the Incredible story of the All American Red Heads